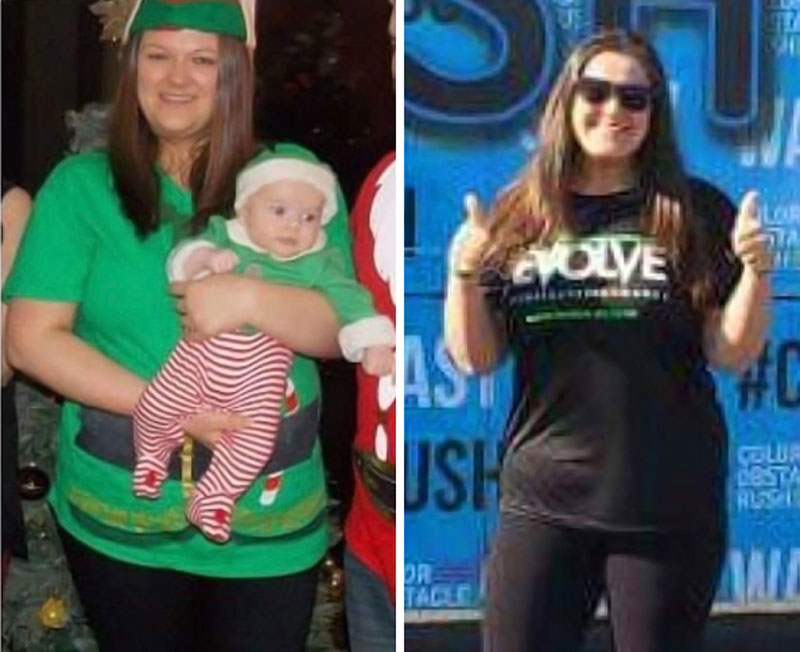 Every January for most of my twenties I have made the same resolution that “This will be the year I shed the excess weight”. After some initial success, I would find myself back in the same position the following New Year.

After becoming a mum in October 2013 things got worse. I found myself 32 years old and weighing 18 stone, wondering how on earth I’d got there. My son was now one and needed me to have the energy to keep up with his demands. I had seen the results several friends had achieved training with Evolve Fitness and Performance and decided it was time I stopped making excuses and started making some changes.

I have suffered with anxiety and depression for several years and getting up the courage to go to that first session was for me one of the scariest things I have ever had to do. I lacked confidence in my appearance and my fitness levels were the lowest they had ever been. I was scared of turning up to a gym where everyone had “perfect” bodies and were super fit.

However, after an initial telephone conversation with Mat Roberts, I finally got up the courage and started training with Evolve in April 2015. They have been extremely supportive and has helped me to gain more confidence than I would have ever had trying to exercise alone.

I have learned new techniques and have enjoyed the variety of exercises that I’ve been taught. My strength and stamina have improved massively and I notice the difference in every day things like being able to carry my son much further than I could manage when he was half the size. The sense of community and support that they encourage between their clients allayed all my initial fears and really helped my motivation.

I am now 3 stone lighter and my body shape has changed drastically. Clothes fit that I haven’t been able to get into for years and I am much happier and fitter than I have been in a very long time. With Evolve’s help I have found that I do have the time and money to make a change. It just took making my health and fitness a priority enough to fit it around my family and job. My weight loss hasn’t always been consistent, however EvolveFitness doesn’t give up on you. They constantly remind me of what I want to achieve and how far I’ve come and always push me to keep going when I have wanted to give up.

I can’t thank Evolve enough and am determined to keep going until I reach my weight and fitness goals.

Well done to my client Chiara Fellone who won gold

A kettlebell chain is a series of exercises strung